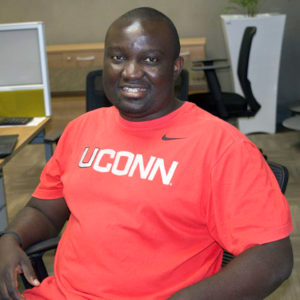 The year 2016 ended on a high note for one Northrise MBA student, Mapande Mapande. Mapande, whose first degree in Information Technology was also obtained from Northrise, concluded last year as the proud recipient of a prestigious “Employee of the Year” award at Madison General Insurance Zambia Limited.

The impressive accolade comes after clocking a year and some months as Systems Administrator at the leading insurance company. Now that’s the Northrise spirit! True to being excellent at what is good! Mapande’s achievement is a testimony moment for the Northrise community; God is at work empowering the people of Zambia one student at a time and transforming the spiritual, economic and cultural landscape of the nation.

Short of words to express his surprise and excitement about the award, Mapande modestly says, “I am so humbled, I wasn’t expecting this!” But of course he is Northrise! In other words, “drilled to be excellent.” With his undergraduate studies at Northrise already paying off, it is no wonder he would rather continue with a postgraduate qualification bearing the same seal.

As an undergraduate student, Mapande was a promising learner. Northrise spotted him and hired him as a home-grown Software Developer shortly after completing his studies. Before long, Mapande took to the helm of development work and became an integral resource to the functioning and developments of software applications in the Student Management System. Along the way, his work also extended to facilitating training of new team members in the I.T department and conducting I.T orientation for new students. A look at Mapande’s contribution to I.T systems at Northrise, and now at Madison, conveys a satisfying conclusion that an NU degree empowers. Mapande is one graduate with evident I.T skills to execute projects and manage complex operations.

In May 2015, Mapande left Northrise to join Madison General. His move has accorded him new professional development opportunities; he is enjoying new challenges in recommending systems, designing and developing apps. With Mapande’s acumen already recognised by his new employer, it is a definite good start to a successful career chapter. Mapande continues to be part of the Northrise community as a Distance e-Learning student. In addition to I.T and business administration skills, Mapande attributes personal developments in people management and emotional intelligence to his experience at Northrise. Mapande’s plans after graduating from the MBA program include securing a more managerial role and progressing to work in systems analysis and project management.